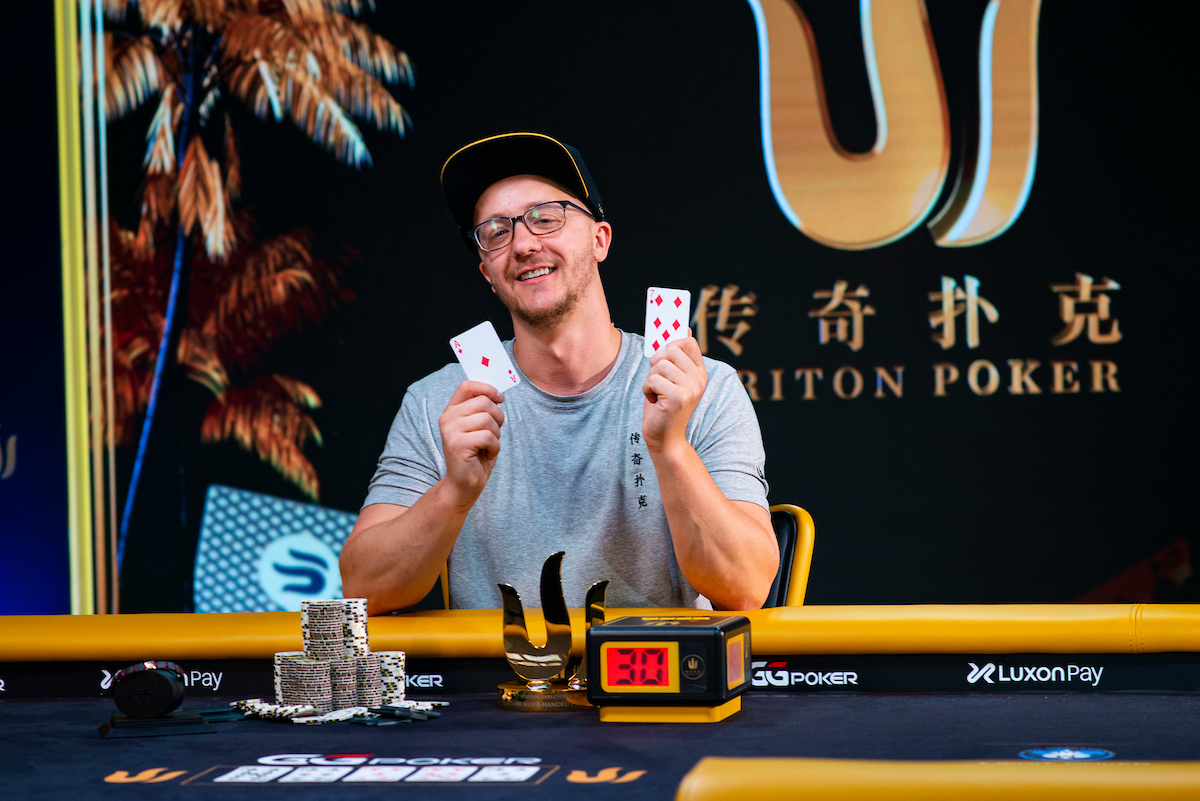 In recent years, the high stakes poker scene has been a happy hunting ground for Australian players — or, more specifically, one Australian player, named Michael Addamo. But tonight at the Triton Super High Roller Series in Northern Cyprus, the biggest prize of the series so far was secured by another player from Down Under, a man who was swimming in the Triton waters before Addamo.

Kahle Burns picked up his biggest previous tournament score at one of Triton’s first events, finishing third in Macau, for $1.3 million, in October 2017. But nearly five years later, Burns is back, and this time he has gone even better.

Burns won the $75,000 buy-in Event #5 in the early hours of Saturday morning, banking a new career best of $1.73 million. He defeated Canada’s Sam Greenwood heads up, with the runner-up also taking a seven-figure score.

“I guess I’m just lucky,” Burns said, when asked how it felt to have come back to the Triton series and immediately secured a win. “I took some time off, spent some time with my girlfriend, my family. When you travel a lot, you start to miss some things. I was missing my friends, missing my family. But then I started to miss the poker, so I came back.”

This was a titanic battle, playing long into the night, and with the Triton Player’s Party starting and then finishing before this tournament was done. The final card came down at 2.23am, ending Greenwood’s pursuit of a maiden title, but adding Burns’s name to that particularly prestigious roll call.

He also won the Shamballa Jewels bracelet, and the biggest cash of his career.

Although plenty of the chatter in the tournament room was focused on the Coin Rivet Invitational, whose table draw was due to take place today ahead of the event tomorrow, registration was still open at the start of play in this $75K tournament, where big money was certain. In all, there were 88 entries, which guaranteed a very long day as they looked for the two millionaires.

The early stages went as expected, with players gradually drifting away without a cash. And then the bubble was navigated fairly smoothly too, with Burns knocking out Sean Perry in 14th. Perry ran into Burns’s pocket aces, having flopped what he thought was top pair with his own

Laszlo Bujtas, Michael Soyza and Pedro Garagnani were then knocked out, securing a cash but missing out on the final.

With 10 left, they went to dinner, but hadn’t been back long before a double knockout took us down to a final table. Both Bruno Volkmann and Jonathan Jaffe were short stacked on the same table and action folded to Volkmann on the button. The Brazilian moved in for his last six big blinds, prompting Sam Greenwood, in the small blind, to re-shove with about 20 bigs. Jaffe then looked down at

in the big blind and decided to commit his last 15 bigs with that.

Volkmann also had an ace —

— but the problem was that Greenwood not only had the biggest stack, he had a better ace than all of them, with

Although he was propping up the counts, there was no question as to who was the happiest player to be sitting at the final table. Santhost Suvarna was at his first Triton Series stop, here to play in the Coin Rivet Invitational, but having previously recorded documented tournament cashes only in his native India. They added up to only around $18,000, so this was a major step up in both stakes and competition.

Making it all the way to eighth had attracted a busy rail of at least five friends or family members. Event when Suvarna lost his final pot, with

, Suvarna’s supporters cheered. They accompanied him to the payouts desk where $245,000 was waiting for him. That will be an enormous confidence boost ahead of the big one tomorrow.

The next player out was Artem Vezhenkov, who had made the money for the second time on this, his debut trip to the Triton Series. After a 10th-place finish in the $25K first event of the week, he earned himself $315K for his run to seventh — and it might have been more had Kahle Burns not rivered a straight with a dominated hand.

and Burns defended his big blind with

. They saw a flop of

and Burns’s bet was called by Vezhenkov. That took them to the

Burns, with a straight draw and a live nine too, moved all-in, covering Vezhenkov comfortably. Vezhenkov called and was ahead, but the

hit Burns and sent Vezhankov out.

The pot put Burns into the chip lead, but Seth Davies retook supremacy in a pot that terminally damaged Linus Loeliger’s chances in the event. Loeliger got aggressive with a three-bet shove from the big blind after Davies’ button open. Loeliger, with 2.6 million in his stack, covered Davies’ 2.1 million.

It wasn’t really about Loeliger’s

. He was presumably hoping for a fold, against a light button open. But Davies had it this time, specifically

, and Loeliger paid dearly for the bad timing.

His stack was cut to shreds and he perished at the hands of Burns not long later. Loeliger won $400,000 for sixth.

Dzivielevski assumed the five-handed chip lead after turning a straight against Burns and extracting all the value, but as the levels grew shorter, owing to the reduced number of players, the stacks grew shorter, applying pressure to everyone else.

Talal Shakerchi’s stack was the next to vanish. He lost a huge pot when Dzivielevski forced him to fold with a big river shove, looking at a board of

, and Greenwood hoovered up the last, winning a race with

Shakerchi’s last appearance on the Triton Series was in London in 2019, where he played the £1 million Helping Hand for Charity event. And he’s in town this week for the Coin Rivet, of course. He’ll obviously be happy with a $510,000 score by way of warm up.

Four players now remained, and they were four of the very best. It seemed highly unlikely that there would be any false steps, so the gods would have a large part to play in how the remaining $4.5 million would be divvied up. Both Burns and Dzivielevski entered a period where they couldn’t win a pot. Dzivielevski in particular doubled up both Davies and then Greenwood, slipping out of the chip lead to become the man most under threat.

He survived another few orbits but the first time Dzivielevski was all-in and under threat, he was out. His

when the smaller ace rivered a wheel.

Dzivielevski has had a decent week, with a second place in the $30K, where he won $750K, and now a fourth for another $630K. It can’t be long until a trophy is heading to Brazil, likely in his luggage.

The three remaining players — two north Americans and an Australian — had only 70 big blinds between them, but they were evenly spread. It meant some cagey play and chips gradually moving in one direction and then back again. As the blinds went up again, it got even more swingy, with each player holding the chip lead and then each surrendering it. There were no fewer than six double-ups as the chips began to fly, with Burns coming out on the right side of most of them.

After Burns won a huge one from Davies — Burns had

and hit an ace — Davies was back on the ropes. The next hand he was out, as Burns found aces and Davies had

. Davies flopped a queen, but it wasn’t enough.

Davies continues to go deep but was still unable to get over the line. He took $815K for third.

The remaining two were both now millionaires, but both obviously still very keen to win their first Triton trophy. Burns had a better than three-to-one chip lead, with 34 BBs versus Greenwood’s 10.

In these circumstances, it couldn’t really be a long heads-up battle, and the first all-in confrontation ended it. Burns had

to Greenwood’s pocket fours, but hit a seven to lock it up.

“Good game, my friend,” Burns said as he shook Greenwood’s hand. Both will be very content with their result.

“If you enter a tournament, you know you’re not really supposed to win it,” Burns said. “So you always have to get lucky…I do what I think is good. Sometimes it works, sometimes it doesn’t.”

This was one of the time it did.