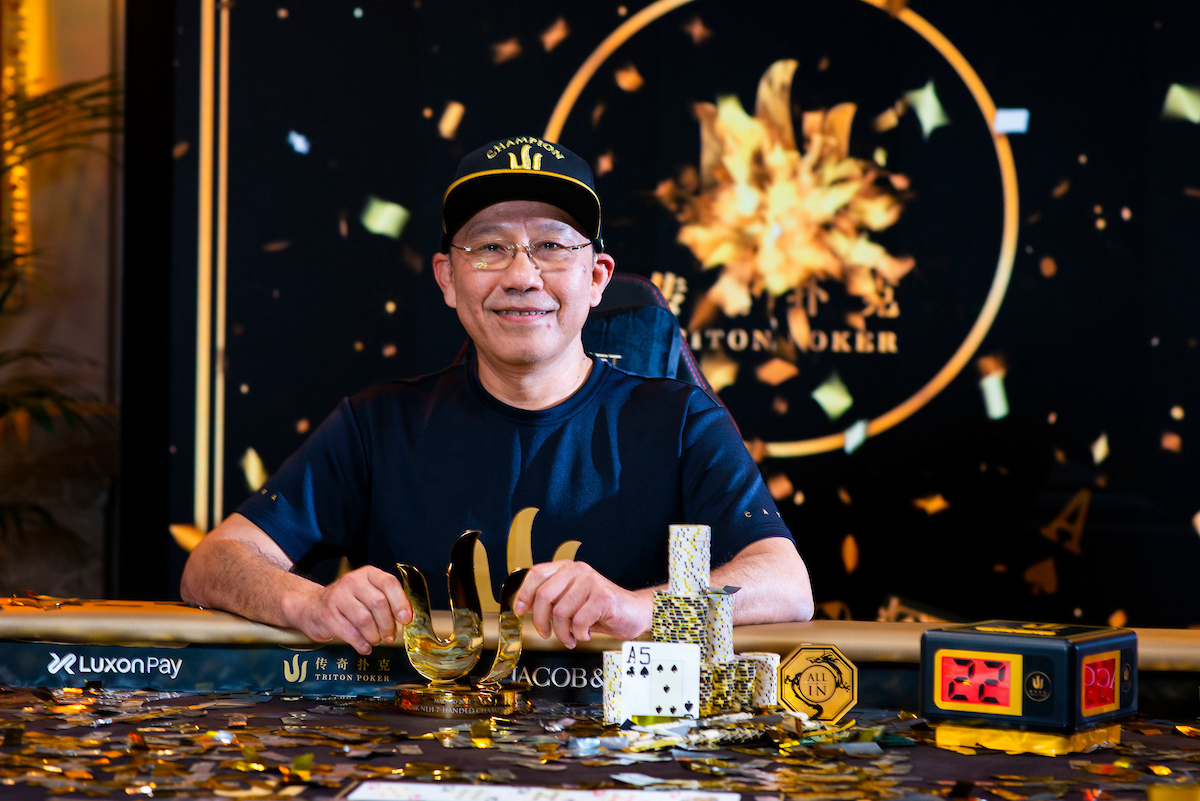 The biggest mystery through the Triton Poker Series’ first six years was how come Paul Phua had not won a tournament. The Malaysian businessman turned poker shark has been an ever present on the world’s premier high stakes tournament series, and had amassed 19 cashes from these incredibly elite fields — the most recent of them coming yesterday, in the opening event of Triton Madrid.

It was more than any other person, and just made it all the more confusing that he had never crossed the finish line first.

But hold the front page for here is some spectacular news. The mystery endures no more. Paul Phua is now, finally, a Triton Series champion!

Phua staged an incredible heads-up comeback to beat Erik Seidel and win the €30,000 buy-in seven-handed event at Triton Madrid tonight. Phua’s title came with a payday of €740,400 and brought his career tournament earnings past $25 million. But none of that money will matter to Phua: it’ll be all about the trophy that he can now, finally, call his own.

“I thought the fourth second place is coming,” Phua said. “But somehow the cards fell for me.”

Nobody can begrudge Phua this one, not even Seidel, who had staged a pretty remarkable comeback of his own to be in touching distance of his first win on the Triton Series. Seidel had been down to two big blinds at one point, but built a big heads-up chip lead against Phua. However, Seidel’s pocket sevens lost to Phua’s

when the reverse result would have given Seidel the win; and Phua then also won with

Phua then closed it out with

to cue pandemonium inside the Casino Gran Via, Madrid. Friends and supporters mobbed a delirious Phua, who could scarcely contain his delight.

It was lucky number 20. Finally it was not just a cash, it was a win.

Phua hugged Seidel, high-fived everyone on the rail, clenched his fists and pretty much crumpled to his knees. The monkey is finally off his back.

“I knew he’d be tough,” Phua said of his heads-up opponent. “Erik’s so experienced, such a great player, but anything can happen.”

Asked by commentator Ali Nejad if he could have ever have dreamed of Triton Series becoming so popular, Phua said, “Honestly, no. After the first few series, it began to get serious. We tried to get the best things in, the best equipment, the best people…We did a good job. But we will always keep improving.”

The same could be said of Phua’s game.

Returning with a field of 21, players knew that eight of them would still need to depart before the remainder were in the money — and it proved to be a real battle to decide those coveted spots.

With such talents as Rui Cao, Timothy Adams and Andras Nemeth already on the sidelines, there were at least 10 short-stack double-ups during the crucial pre-bubble period — “bubble-ups”, if you will.

On the one hand, it was just a matter of sitting and waiting for all those with plenty of chips, including Kevin Paque, Phua and Mike Watson, who led the way at the time. But on the other, they will have been just as keen to try to knock out the obdurate shorties, bringing us to the drawn out impasse.

When the pressure finally became too much, it was Tom Vogelsang who became the bubble boy. His debut on the Triton Series in Cyprus ended in pure delight; this follow up in Madrid gave him a taste of the other side of tournament poker. (He’s made of stern stuff, however, and will surely be back.)

The drawn-out bubble period meant that stacks shallowed considerably and most of the players in most danger soon got their last chips in. Fedor Holz, Michael Soyza, Kevin Paque, Danny Tang and Patrik Antonius were all in and out, picking up between €56,000 and €78,100.

There are many ways to understand how impressive the fields are on the Triton Series, but just look at that little lot who fell short of the final table.

How about if we add one more name to that list: Phil Ivey, because it was indeed the all-time great who went out in eighth, officially the final-table bubble in this seven-handed affair.

Ivey is on an incredible run of form through these past couple of months, but there was no room for him at this final. He lost with

And so we were left with seven, including all of Haxton, Daniel Dvoress and Seidel, who had been critically short on the bubble but somehow managed to survive. They were, however, looking up to Kannapong Thanarattrakui when the final table assembled: the Thai player having managed to navigate this incredibly tough field to sit with 43 big blinds at the start of final table play.

At the other end of the ladder, Dvoress, Heath and Watson had fewer than 10 big blinds each, and predictably they were the first three out.

and Watson moved all in for his last 1.125 million with

. Dvoress folded pocket eights after thinking long and hard about it, but Haxton made the call.

The flop gave Watson two pair, but he was far from happy. It came

, which left Haxton with a ton of outs. The

turn wasn’t one, but the

Having seen his decision to fold those pocket eights vindicated, Dvoress might have thought his luck was in, especially when he quickly doubled through Haxton with

. However, he lasted only a few more hands and was knocked out by Phua is another cooler.

and Dvoress took a flop in the big blind with

. Like Watson before him, Dvoress flopped two pair, but again like Watson, it still wasn’t great. The specific flop was

, so that was a flush draw for Phua.

The money went in and Dvoress was at risk. The

didn’t immediately kill him on its own, but in combination with the

river, it certainly did. Phua had filled a straight, and Dvoress was toast. He won €167,400 for sixth.

With the two Canadians eliminated, pressure fell on Seidel and Heath. Seidel doubled with pocket tens, again through Haxton, but Heath wasn’t so fortunate. He got his last chips in with the pretty looking

on the button, and although Seidel’s

in the big blind looked pretty raggedy, he called, turned an ace, and Heath was finished. Heath’s fifth place earned him €214,800.

If you’d have asked Thanarattrakui at the start of the day whether he’d be happy with a fourth-placed finish, chances are he would have jumped at the chance. But having been in the chip lead seven-handed, he might have reassessed. However, Thanarattrakui did indeed make it to fourth in this one, his first Triton cash, and one suspects he’ll come to be very happy about it.

He had dwindled to a short stack four handed, the result of some mistimed aggression, and got his last two big blinds in with

. Haxton, who had recently doubled through Phua, called with

and the board bricked out. Thanarattrakui’s maiden cash was for €266,500.

Haxton’s bumpy ride wasn’t to last much longer, however. Phua had been more aggressive during today’s play than perhaps we had ever seen him before, and he open-pushed with

did the math and called.

When they got heads up — two absolute legends of the game — there was only the matter of four big blinds between them, with Phua slightly ahead. But Seidel’s experience really told as he edged further and further ahead.

Phua was faced with elimination, yet another second place, until he hit those miracle cards. Seidel could only chuckle and offer his heartfelt congratulations. He will almost certainly join Phua’s party tonight.

And what about Phua. What will he do now?