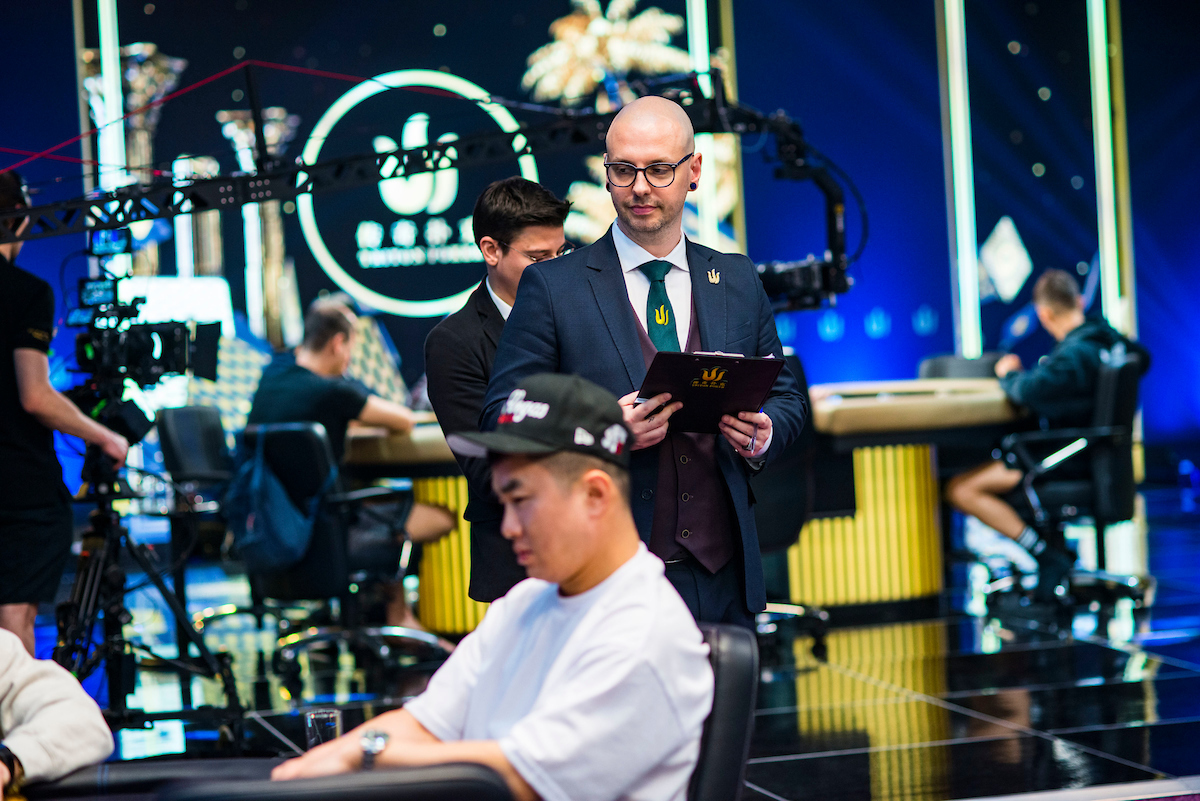 After your aces get cracked for the third time in a row, you might find yourself muttering that poker is so unfair. It can seem that way every now and again, but remember nobody can control what cards you see.

However, players on the Triton Series can be absolutely certain of one very important fact: the tournament staff on this tour do everything in their power to ensure fairness in every other aspect of the game.

Where the stakes and skill levels are super high, every tiny detail can be incredibly important. The fields are full of elite players, who base their decisions on precise calculations, and for whom margins are exceptionally thin. It’s only proper that tournament staff do everything they can to ensure a level playing field. No player should worry about their meticulous preparations being undermined by someone else’s negligence.

Triton Tournament Director Luca Vivaldi has overseen high stakes tournaments for more than a decade, and has introduced a few innovations specifically for these exclusive, small-field tournaments, designed to ensure fairness.

To a casual poker fan, the importance of these things might seem vanishingly small, but they are crucial to the elite player, and add to Triton’s overall appeal. Here, Vivaldi talks through three relatively new ways in which fairness is promoted on the Triton Series.

When the bubble approaches in tournament poker, it is often in a player’s interests to slow the action down, hoping for someone to be eliminated on another table. The fewer hands you see, the higher your chance of survival, and that means it’s just shrewd tournament management to stall as long as you can before folding.

Shot clocks have helped to address stalling in general. And hand-for-hand play on the bubble is also commonplace is almost all tournaments. But on the Triton Series, we also have a period of play known as “soft” hand-for-hand, in which tournament staff track play on two (or more) tables and ensure that, broadly speaking, all tables play the same number of hands.

This requires a member of floor staff to stand between the tables and log how many hands are being played on each. If one table ends up playing many more hands than the others, they are told to pause while the others catch up. But, of course, not all poker hands take the same amount of time to complete, and the loggers also record whether action concludes pre-flop, on the flop, turn or river, and make judgments accordingly.

Vivaldi said: “The need for soft hand-for-hand is to stop the players intentionally stalling during the pre-bubble period. Also it’s because sometimes there might be a table that is shorter in players than another table.

For example, in a six-handed tournament, you might have one table that is four-handed and the other two tables are five-handed. We track when the action ended on every table, to see if there’s a need to stop one table from playing, for the other ones to be able to catch up.

Obviously we always want the tournament to play as naturally as possible. We don’t play hand for hand at the beginning of a tournament, of course. We are actively tracking all of these little details to ultimately assure fairness as much as possible in every tournament.”

How far ahead does one table need to get before it is told to stop?

Vivaldi: “It really depends on the data we collect. For example, if one table is ahead by four hands but they only had pre-flop action, and the other table had a lot of action and it went to the river multiple times with all-ins and calls, then we won’t stop it. Obviously if it’s unnatural — if every table went to the river every single time — and after a round, one table is four hands ahead of the other, we’re going to stop that table to make the other table catch up.

The players are on board with it and they really appreciate it, as they are with every other procedure that we introduced first at Triton, such as manual seating at the start of the tournament.”

Tournaments on the Triton Series are small, with usually no more than about six to eight tables in play even at the busiest period. At the very start of the day, there’s often just two or three.

Vivaldi previously noticed unregistered players coming to the tournament room and looking over at the tables, trying to figure out where the empty seats were and deciding which ones would be the most profitable. They would only then register for the tournament when they figured they had the best chance of being given one of the most profitable seats — a process known as “table shopping”.

Table shopping only works if the tournament uses common poker tournament seating procedures, whereby players get seated at the tables with fewest players. But manual seating, which was pioneered on the Triton Series, solves this problem.

Vivaldi says: “When we start a tournament, and we have enough players to start the game — which usually is 75 percent of one table, or two tables minimum — we ask the players to randomly draw their seats with seat cards.

Once we start the tournament, to maintain fairness and randomness in the whole process, we ask the players to pick two cards. The first is a table card, which tells them which table they’ll be at, randomly. And then from that table, they will pick a seat card.

During registration, there’s quite a lot of balancing, quite a lot of moving of the players, but they all understand that it is for the fairness of the game. They don’t mind moving. So if they pick a table that is six handed, you’d get seven, six and five. We would balance out to the table with five.”

TRACKING AND BALANCING BASED ON PLAYERS SEATED

Vivaldi again: “Another thing that we do exclusively at Triton is to track which table played the fullest the longest or the shortest the longest, to make sure during the registration period that when we balance a table, from one table to another table, we will do it from the table that played the longest amount of time with more players.

Let’s say there are three tables, tables one and two are six handed and table three is four handed, instead of balancing from the highest table, which would be table two, we would go to our sheet that we were filling in during registration and we can see which one, from the two tables, got six players first. That would be the one that played the fullest longest, and we would take the player from that table, and balance it to table three.

Obviously with 100 tables, it’s something you cannot possibly do. But in these exclusive events, we try to find the smallest details that can really make a difference. In buy-ins this high, with these exclusive players, it’s important.

Nobody complains, even if they are being moved often, because they are regulars with Triton and they know that this is our procedure, this is what we do, and that we do it for the fairness of the game.”

Almost all Triton events are streamed live, with hole-card information displayed. There is, of course, a security delay on the broadcast, so players’ cards cannot be seen in real time, but even with this delay, the very fact that a player is essentially showing his cards to his potential opponents can work against him in the long term. All good players will be studying the stream later and looking for tendencies and tells.

For this reason, it’s only fair that nobody spends more time on the feature table than anybody else. That player may be a fan favourite, but it is not good for game integrity if any one player is forced to play on TV longer than any other. In order to solve this, tournament tables are regularly rotated through the TV stage.

Obviously for these players, revealing their cards gives information, and information in poker is extremely important. We want to make sure that we’re not unfair to certain players and keep them all day at the feature table. That’s why we rotate every player during the day.”