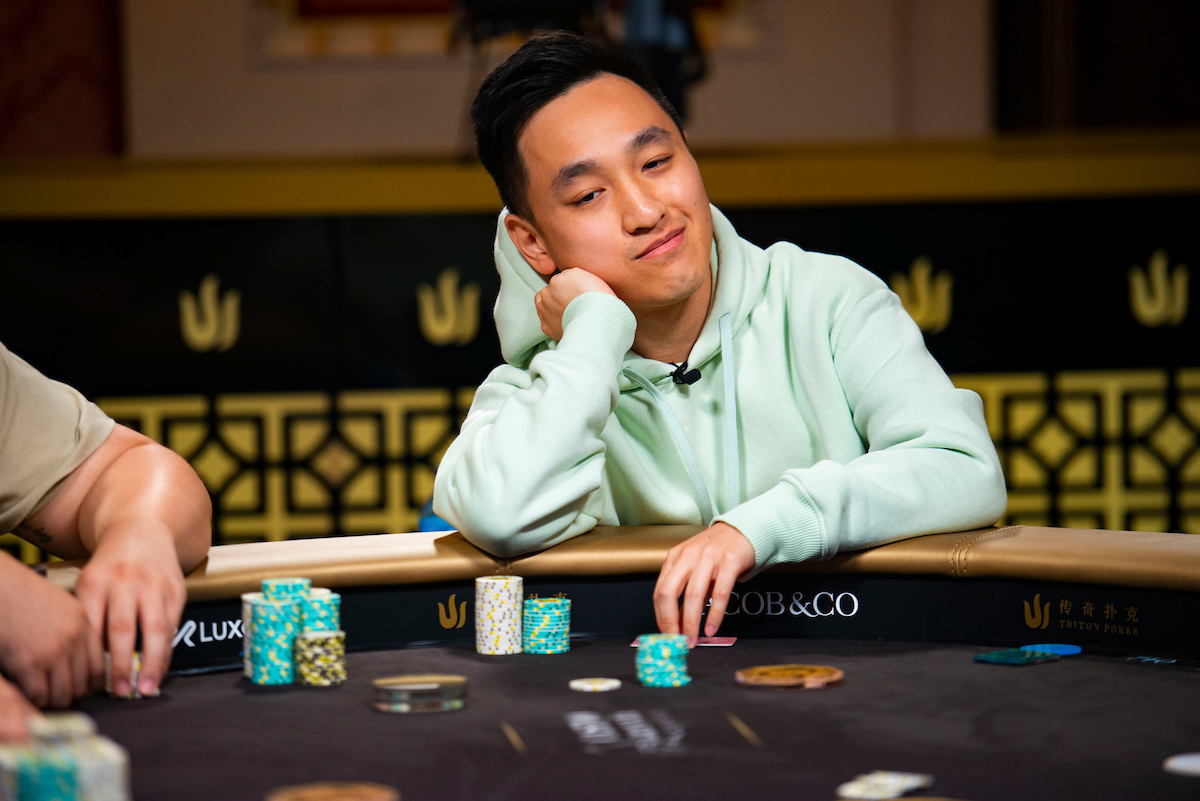 The stereotypical short-deck hold’em hand features wild bets driven by pure speculation, then unlikely suck-outs, celebration and commiseration. But honestly, it’s not always like that.

Today at Triton Madrid, they’re playing the €100K Short Deck Main Event, where there’s €6 million in the prize pool and €1.8 million up top. But first there was the matter of a €240K bubble — and that meant play for the opening couple of levels took place in library-like silence, with pots kept mostly small as only nerves ratcheted up.

There were notable exceptions. On the very first hand of the day, Chris Brewer lost the last of his stack in a pot worth 2.8 million:

. And then Jason Koon, the overnight short stack, was out with

The volume spiked fairly rapidly a few orbits after that, however, when Tony G doubled into the chip lead. Guoga limp-called Chidwick’s raise, and the pair saw the

flop. Guoga checked and Chidwick moved in, his 2.3 million covering Guoga’s stack by about 1 million.

Guoga called and showed his pocket queens. Chidwick’s pocket aces were in trouble, and didn’t get any help.

“Run the aces down, beat the pros,” a triumphant Guoga explained, prowling between the two tables. Chidwick shipped the chips over and assumed the duties of a short stack.

Even Guoga quietened down a little during the next hour or so as Phil Ivey silently departed. Guoga actually knocked him out, with

, and Seth Davies, with

also losing a chunk in a three-way pot. The board was

, with the river king sealing it.

Then Bjorn Li, who had finished in second in a previous short-deck event, headed out in 10th. All the eliminations to this point had come from the same table, but Richard Yong sent Li packing from the other table, with

That took nine players on to the stone bubble, and some difficult tournament administration for the floor staff. One table had five players and the other had four, but they would not combine until they were down to seven (and into the money). At this stage, they would play hand-for-hand, but they also had to be prepared to balance the tables.

Luca Vivaldi, the Triton tournament director, has introduced a number of innovations to make sure these kinds of situations are as fair as possible in these high-stakes tournaments, and here was another. After one round of play on the five-handed table (i.e., five hands) a player would be balanced from that table, on to the four-handed table. But in order that players didn’t adjust their play knowing they were about to be moved from a table, this balancing would only take place after a random number of subsequent hands.

The floor staff performed a random draw from one to five, out of the players’ sight, and after that many more hands, the under-the-gun player was due to move tables. If hand-for-hand went on for another five hands, then the process would repeat and a player would come back from the five-handed table onto the four-handed one. Repeat, repeat, like a tennis ball, for as long as it took.

So, first they needed to play five hands and, during this period, Isaac Haxton moved all in from the cutoff and pinched Mikita Badziakouski’s button ante. But Badziakouski pushed all-in on both the next two hands, earning it back from Chidwick and Seth Davies.

While they still awaited the result of the balancing lottery, Chidick and Badzkiakouski then played through the streets on a limped pot, with Chidwick’s pair of jacks winning it. “Nut low,” Badziakouski declared on the checked river.

They had played eight hands on the five-handed table when action paused because Webster Lim was all in on the feature table. He had been called by Yong. Lim, all-in for 620K or 25 antes, had

Lim picked up a flush draw on the turn, but missed everything and was out in ninth. It was the first all-in call of the bubble period and ended in elimination. That’s Lim’s second bubble of this stop, but he has also won an event, so is still going to come away from Madrid happy.

As are the other eight players, all now in the money in this €100K event. That’s a nice place to be.