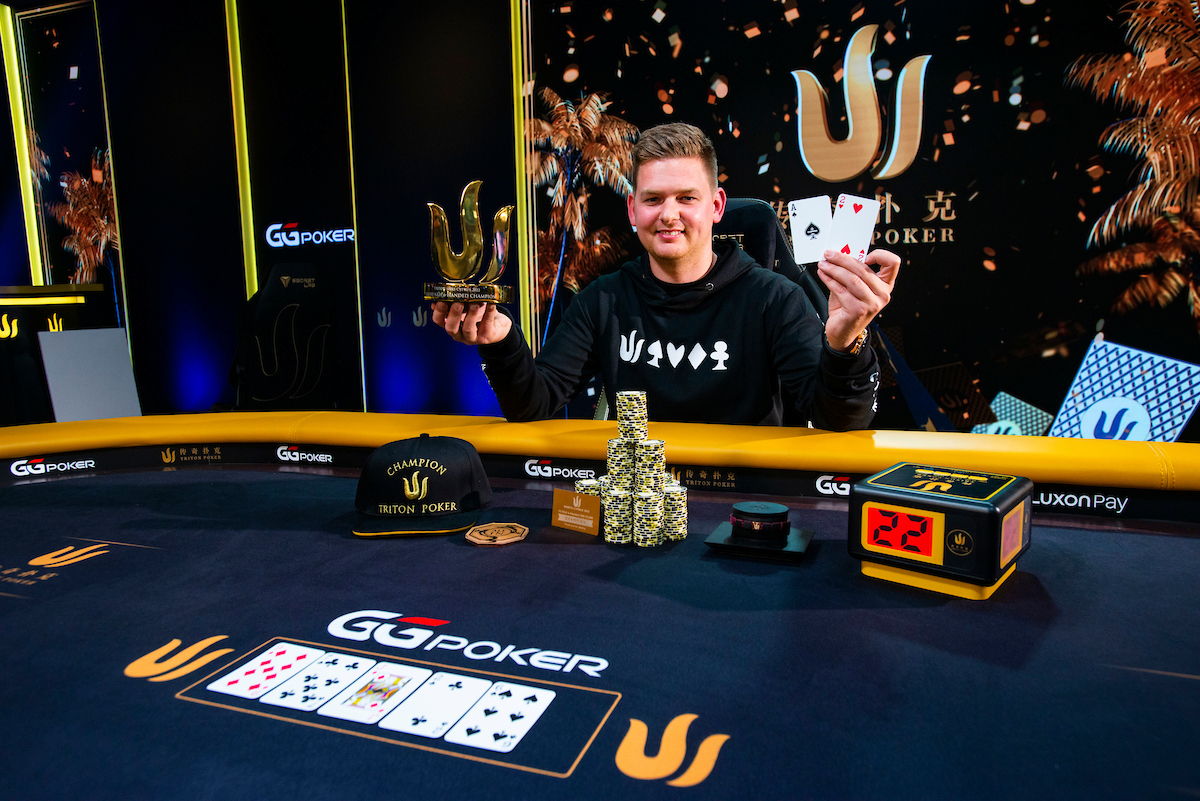 The best thing about these long stops on the Triton Series is that no matter how badly it goes one day, there’s always a chance for redemption soon after.

Back on Tuesday night, Aerts was the bubble boy in Event #2, busting just one agonising spot short of the money in the €30K 6-Handed tournament. But two days later, Aerts is now a Triton champion, picking up $1,472,000 alongside his first Triton trophy as the winner of the €50K 6-Max in Cyprus tonight.

“Obviously, I feel very, very good,” Aerts said, clutching that trophy alongside his exclusive Shamballa Jewels bracelet, handed to winners at Triton Cyprus. “I got luck to be in this position, but I guess that’s always the case.”

Aerts revealed that he originally had a flight back to his native Belgium booked for today, but changed it so he could play the final table. The same thing had happened a few weeks ago, when he had a flight booked on the day he also made it to the final of a World Series event on GG Poker. Aerts changed his flight that day too and went on to win the bracelet.

If anyone needs the phone number of Aerts’ lucky travel agent, he could probably auction it to the highest bidder.

Aerts defeated the British pro Sam Grafton heads up, after those two were the final players left of a 117-entry field. The luck Aerts referred to in his interview came on the final hand, when he managed to spike a deuce to eliminate Grafton when Grafton had a dominating ace in an all-in pot. But having suffered that bubble experience, it’s difficult to begrudge him the victory this time. Grafton will surely be content with $994,500 for second.

Aerts paid tribute to all of his beaten opponents, as well as the staff of the Triton Series, and his supporters watching the stream.

“These events are top notch,” he said. “It’s been such a good experience…It’s something I hope all poker players can have. I want to thank everyone who was railing me at home.”

Aerts finished his winner’s interview by issuing an open invitation to any watching businesspeople who might be considering a late entry to the $200,000 Coin Rivet Invitational, starting on Saturday.

If someone wants a player in form, Aerts will surely happily change his flight again…

With 36 players surviving the 12 levels of the opening day, everyone in the tournament room at the Merit Diamond resort knew they were in for a long day today. We had to find a winner, and stacks were deep at the start.

The first significant order of business was the bubble, which would burst when only 17 remained. As is typical, the tournament flowed quickly as the bubble remained in the distance, but then slowed significantly as it loomed clearly into view. It took 11 hands of hand-for-hand play on three tables before Vladi Chaoulov, who had been chip leader earlier in the day, became the player to leave with nothing.

Chaoulov lost two major pots, both to Fedor Holz and both with less than premium holdings —

— although it was probably only because Holz had trips and then a straight, respectively, that he was able to pick him off. Chaoulov had merely mistimed his aggression and paid the price.

With Chaoulov gone, the rest of the field could relax and pick up a minimum of $92,000 apiece — although all, of course, were still focused on the first seven-figure payday of the festival.

Post-bubble, all of Espen Jorstad, Paul Phua and Jason Koon, among others, were swept away, and when Thailand’s Punnat Punsi hit the rail in eighth, the last seven assembled around just one table. It was a six-handed tournament, but they don’t play with a four/three divide.

Holz was still in a clear lead, and his closest challenger was the bubble boy of Event 2, Pieter Aerts, who had this time made the most of surviving through the earlier dangers. Kannapong Thanarattrakul was at his second final table of the week as was Ben Tollerene, of course, who was yesterday’s champion.

The seven-handed stage went on far longer than anyone could have expected and, for some people, far longer than they could possibly have wanted. Chief among them was Holz, whose previously unimpeachable stack suddenly took a nosedive. He lost a major pot to Aerts when the two leaders got involved in something that got badly out of hand. Holz had three-bet pre-flop with

and continued to tell the same story of strength after the

flop (it went bet, raise, call here) and then after the

turn. That’s the point at which Aerts shoved for his last 2.3 million and Holz called.

There have been a lot of amazing hero calls already in this Triton festival, but this wasn’t one of the successful occasions. Aerts had pocket jacks and was good, scoring the full double. It left Holz with only 2.3 million, but when he found a pair of jacks of his own a few hands later, both Kannapong Thanarattrakul and Ben Tollerene had ace-king and ended up chopping it up on the river when a king fell. Holz was walking away as they divvied up his chips, picking up $260,300 for seventh and a second cash in consecutive days.

Isaac Haxton became the next man to hit the rail, having not really been able to do much more than tread water at the final. His elimination was one of those unfortunate ones that plays itself: Matthias Eibinger open-shoved the button with a stack that covered both Sam Grafton, in the small blind, and Haxton, in the big.

Grafton got out of the way, but Haxton’s pocket eights were way ahead of Eibinger’s shoving range in this spot and he called. Eibinger had

It was about this point that Sam Grafton began an exceptional resurrection. Grafton had been the short stack for quite a while, essentially clinging on for dear life. But he managed to double up through Haxton, Eibinger and Tollerene, making him far more comfortable as each of those three went broke.

Eibinger lost a heap in the pot against Grafton —

— and the rest of it went to Tollerene with

But Tollerene followed him quickly out of the door, getting

. This was only Tollerene’s third Triton tournament and he followed up yesterday’s outright victory with a fourth-place finish, worth $535,000. Easy when you know how.

While the back-to-back final-table exploits of Tollerene and Holz did not go unnoticed, only one player in today’s final had cashed all three of the opening events in this festival. That man was Thailand’s Kannapong Thanarattrakul, who finished seventh in Event #1 for $145K and 10th in Event #2 for $75,000. He was also now in the final three of Event #3, and although he went out next, he banked another $646,500.

Grafton and Aerts combined to account for Thanarattrakul, with Grafton’s pocket fours taking a chunk, followed by Aerts’s pocket sixes. The final sliver went to Aerts when Thanarattrakul pushed with

and Aerts called and won with

Aerts had a significant chip lead when heads-up play began — around 16 million to Grafton’s 6.5 million. But the big blind was 250,000, so there might still have been some play in it yet. However after about half an hour of play with no significant chip fluctuations, the first major pot of heads-up ended up being the last.

Aerts, in the small blind, looked down at

and just called. Grafton, with a stack of 6.7 million, found

and raised it up.

Aerts pushed all-in, with a covering stack of about 17 million, and Grafton snap-called. This was looking like a great spot for another Grafton double up, and the flop was clean. But the

popped out on the turn, vaulting Aerts into the lead, and he never let it go.

“My birthday in coming up in two weeks, so me and my friends are going to have a pretty big celebration,” Aerts said, revelling in this second triumph. Start looking for flights to Belgium.