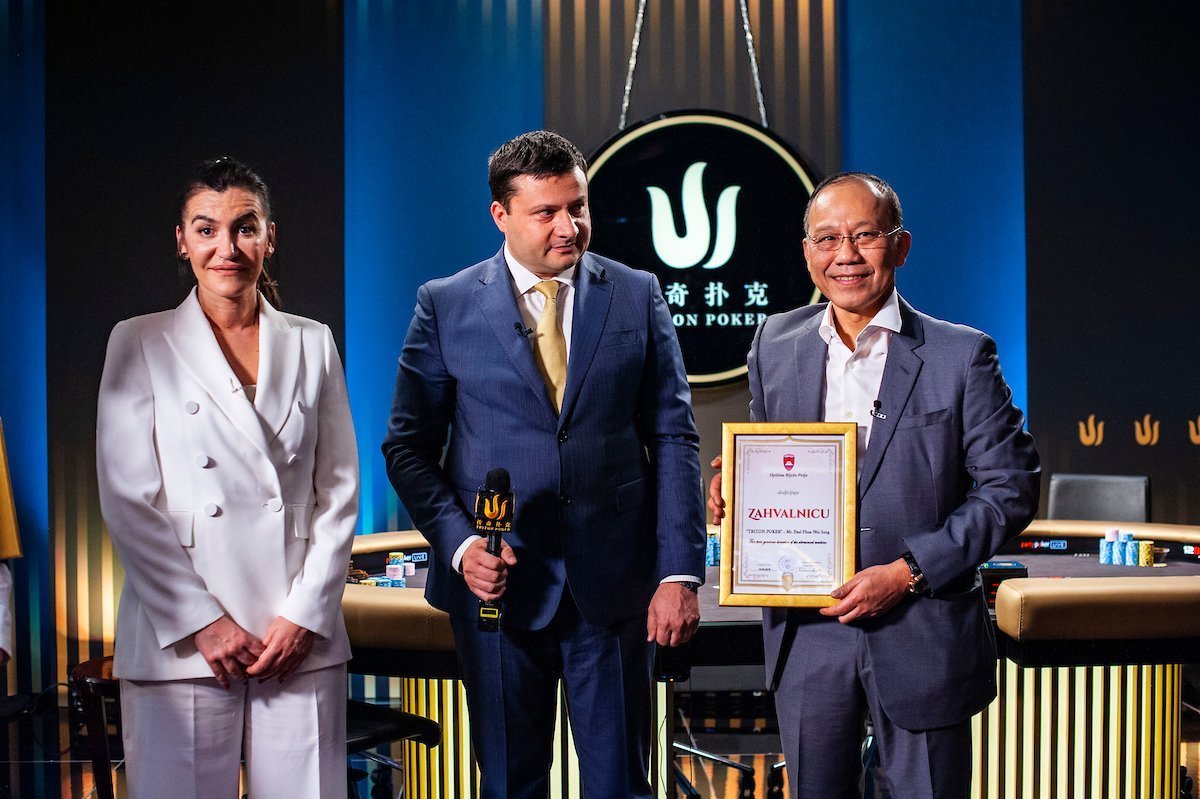 A lot of money changes hands on the Triton High Roller Series, but its co-founders Paul Phua and Richard Yong were clear of one thing from the start: the company is not interested in any profit. Any revenue generated away from the tables should be donated to various charitable causes.

This commitment was again underlined this afternoon at the Maestral Resort & Casino, Montenegro, when Phua greeted two special guests to the poker room and made Triton’s latest life-saving donation. In the presence of Petar Smolovic, the mayor of Bijelo Polje municipality, Phua handed a donation of €31,030 to Biserka Bulatović, the director of Bijelo Polje’s General Hospital.

That is the precise cost of a Hitachi Alokfa F37 ultrasound machine, a key piece of equipment for hospital that will help diagnose patients without the need for invasive procedures. The hospital has waited for 10 years for this particular piece of equipment, with Triton responding to a personal request from Mayor Smolovic.

“This donation is very important for us,” Mayor Smolovic said. “This donation will raise the level of medical services in my town. I would like to say thank you to Triton Poker, and especially Mr Phua.”

Bijelo Polje is a town in northeastern Montenegro, on the Lim river and close to the border with Serbia. Its 15,400-strong population will all benefit from the donation, which will be delivered immediately to the hospital.

“We have been waiting for this donation for 10 years,” Dr Bulatović said. “This amount of waiting tells you what it means to us. It will help a lot, especially patients with heart diseases. We are very happy.”

Dr Bulatović revealed that she had found out only yesterday that the donation was being made to the hospital. “It’s a very nice surprise,” she said. “I am happy today to be here. It means a lot to patients, but also it means a lot to doctors who will use this ultrasound machine.”

She continued: “Thank you in the name of the hospital, the citizens of Bijelo Polje and in my personal name. We wish you luck and prosperity in your future work.”

Phua received a gift of an official shield representing the municipality of Bijelo Polje and vowed that this would be the first of many donations made from Triton to the region.

“We hope that every year as we come back to host tournaments we can do something for your town,” Phua said. “We hope to do more in the future. I think it’s important that the money we make from poker, part of it is given back to the community, especially at the stops that we go to.”

Phua added: “The mayor has a special relationship with our company, and he requested that the hospital needed this badly. They’ve been waiting for 10 years to buy it. So why not let Triton sponsor it?”

In previous years, profits from the Triton Series have gone towards charitable causes in the Philippines, Hong Kong and Macau. Phua said that he wants to expand the reach of the charity into every community the tour now visits.