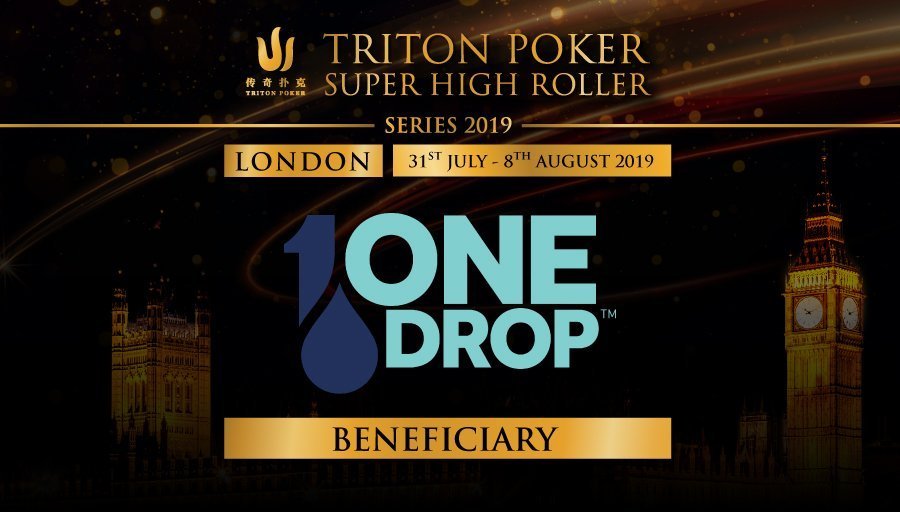 Jul 2019 – In 2012, poker enthusiast and Cirque du Soleil founder, Guy Laliberté envisioned the biggest buy-in poker tournament in the world, with a charitable focus. In partnership with Caesars Entertainment and the World Series of Poker (WSOP), the $1m buy-in No-Limit Hold’em Big One for One Drop was born. During the 2012 WSOP, 48-people raised $5.3m for the One Drop Foundation, and Antonio Esfandiari won the world record $18.3m first prize.

$1m buy-in One Drop events have run biennially ever since. In 2016, the buy-in record broke when Elton Tsang won the $12.4m first prize in the €1m buy-in Monte Carlo One Drop Extravaganza.

In August, that buy-in record will once again be broken when the £1,050,000 buy-in Triton Millions: a Helping Hand for Charity takes place in London’s Park Lane Hilton. And, once again, the One Drop Foundation will play a pivotal role.

Triton Poker has added The One Drop Foundation to the list of Triton Million beneficiaries, with 15% of the total amount raised for charity going towards Laliberté’s foundation. One Drop joins Raising for Effective Giving (REG), Caring for Children Foundation, Healthy Hong Kong and Credit One World Charity Foundation as the non-profits benefiting from this landmark tournament.

The £1,050,000 buy-in Triton Million: A Helping Hand or Charity takes place August 1 – 3, with the £50,000 registration fee split between the five charities. The event has already raised £1.5m for charity with the headcount expected to rise further before the tournament begins.

The Triton Poker Series inspires lovers of poker in the pursuit of preeminence. We provide innovative games, peerless poker rooms, and tables full of world-class poker players, entrepreneurs and titans of business.

Poker is the perfect vehicle to reduce pain and suffering in the world. As we stand at the summit of the game, our ability to serve others through charitable donations, tournaments and other enterprises is unparalleled.

We are the purveyors of poker excellence.

Triton Million is a charitable No-Limit Hold’em event with a buy-in of £1,050,000, with the registration fee donated to Triton’s philanthropic partners. The first-ever Triton Million event takes place in London’s Hilton in Park Lane August 1-3, breaking the record for the richest buy-in event in the history of poker.

For further information on Triton Million, or if you wish to register your intention to play, then email vip@triton-series.com.

One Drop™ is an international foundation created in 2007 by Cirque du Soleil and Lune Rouge founder Guy Laliberté with the vision of a better world, where all have access to living conditions that allow empowerment and development, today and forever. Our mission is to ensure sustainable access to safe water and sanitation to the most vulnerable communities through innovative partnerships, creativity and the power of art. Together with its partners, One Drop brings its unique Social Art for Behaviour Change™ approach to promote the adoption of healthy practices around water, sanitation and hygiene through locally inspired social art programs, empowering the communities to take ownership of the projects over time. One Drop counts over 10 years of turning water into action with projects that will transform the lives of over 1.4 million people around the world. Since 2012, One Drop’s support from the poker community has generously grown and, together with the World Series of Poker, poker players from around the world and other important collaborators in the industry, has raised over $23 million from poker initiatives only.

To learn more about One Drop, visit www.onedrop.org.