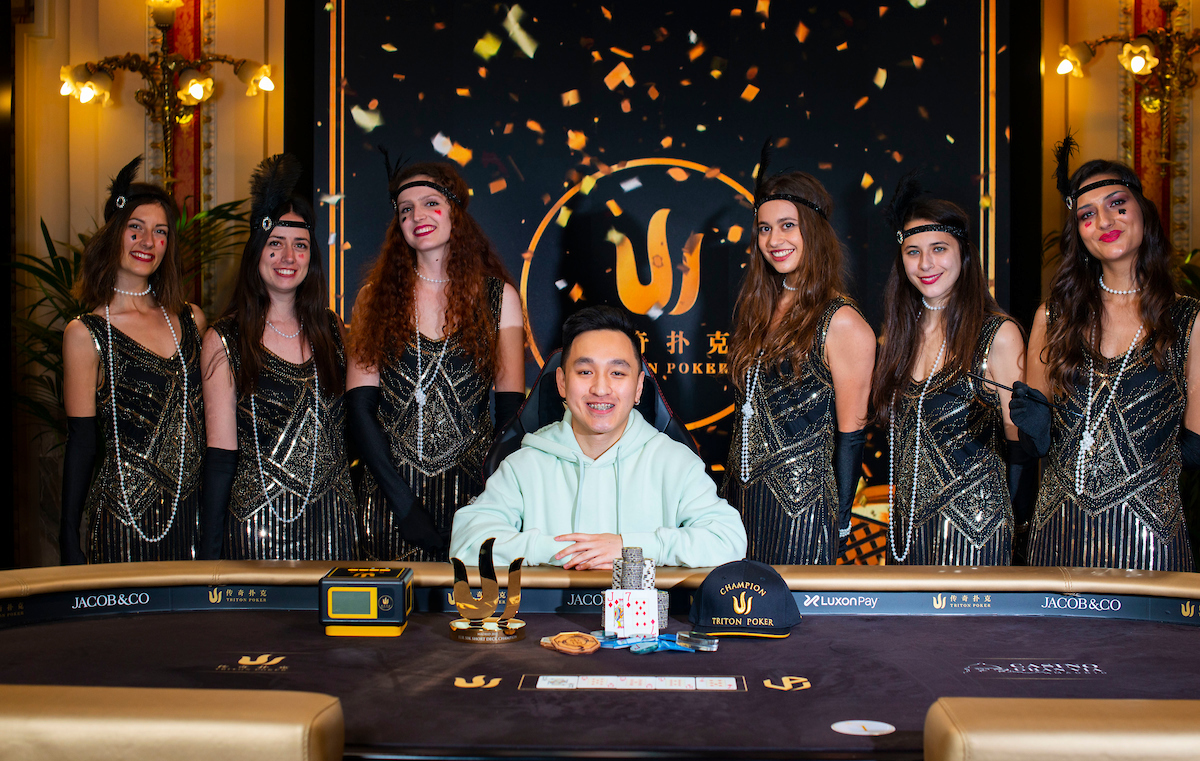 Lim has been a regular on the series ever since its early days, picking up five previous cashes but never managing to get beyond fourth as luck deserted him when it mattered most.

However, Lim today put on a near-perfect show, rising from the middle of the pack (he was 13th of 21 returning today) to overhaul two previous chip leaders, Wai Kin Yong and Bjorn Li, and take down his first event.

Li, who has considerably more heads-up short deck experience than Lim, led for the longest periods of the day, but was beaten heads up and had to settle for €618,500, also his biggest Triton cash.

Lim was delighted — and immediately acknowledged that he had the run of the cards today. “A lot of bad beats came my way, but in the €20K I didn’t run so good. So things kind of get even here,” he said.

He then added that it was still a strange experience for him, a player who only took up poker in 2013, to be sitting alongside so many of the top stars who inspired him to learn the game. “Every time I sit at the table with them [Tom Dwan, Phil Ivey, etc.] it still feels surreal. Back in the day I watched them on YouTube, and now I’m sitting with them. It’s a dream come true, I guess.”

Lim also said that he may have to reassess his previous statement that he preferred the long deck version of the game. “I guess short deck is my favourite now.”

Whatever version he plays, Lim has proved that this fan boy is now a real contender.

Some of the players who have enjoyed a profitable Triton Madrid stop to date had at one point seemed certain to add to their winnings, but all of Seth Davies, Stephen Chidwick, Chris Brewer, Danny Tang, Mikita Badziakouski and Rui Cao were eliminated before the bubble.

That left nine, but one more needed to depart before the money kicked in. On this occasion the sword fell on Sam Greenwood, though his elimination was formed of two parts. Firstly, he was one of three players involved in a three-way all-in: Elton Tsang had pocket kings, while both Greenwood and Cao had ace-queen. All the money went in pre-flop and Tsang was in great shape, facing opponents who had each other’s outs.

There was a king on the flop and Tsang all but tripled through. Cao, with a shorter stack, busted, and Greenwood was left with just a handful of antes. He tried to cling on to them as long as possible, but another

cost him the rest.

and that gave Greenwood one of those super difficult tournament decisions. He was ahead of most chip-leader shoving ranges, but short deck does strange things. Eventually he called, but Lim filled a straight to his ten. Greenwood had to take the walk.

Lim was the dominant force in the tournament, which was still being played over two tables at this point. He only got more powerful after knocking out Rene Van Krevelen in eighth. Lim shoved again, with

, on the four-handed table, and Van Krevelen called it off with

Van Krevelen took €114,000 for eighth, his first Triton cash, as the last seven now consolidated around one table.

It’s not often you see Phil Ivey clinging on to a short stack, but Ivey managed to find his spots to get his chips in and chip up a small measure. It was certainly enough to enable him to ladder one spot.

Ryan Yum, who has now run deep in two short deck events this week, became the first to leave the feature table, losing the kind of flip you see most often in the long-deck game. Yum had pocket jacks to Wai Kin Yong’s

. The board was unnecessarily emphatic:

And after that, it was Ivey. The all-time great showed in flashes exactly why his game is so revered, repeatedly finding very thin opportunities to chip up from that short stack. (He also managed a double up with aces through Bjorn Li’s

, but anyone can do that.) But even Ivey couldn’t do very much about Lim outdrawing his

This Madrid stop has been a very good one so far for the extended Triton family, with Paul Phua winning his first title, and his co-founder Richard Yong finishing second in another event. Richard’s son Wai Kin has a better record than both the senior parties — he has three titles already — and he was at this final table, looking for his fourth.

However, Yong’s chances took a nosedive in a big pot against Lim — although it at least ended with a chuckle. After an early-position limp from Winfred Yu, Li continued his bullying with a shove from the cutoff. Yong had 1.3 million in his stack on the button and decided

was good enough to call.

He was up against Li’s

and Yong got very excited when he saw the board of

. He thought his two pair was good and began to celebrate.

But Li had the “hidden” short-deck straight, and Yong suddenly realised with a pang of horror that he was out. He laughed and went looking for €233,700. (If you have his WhatsApp, send him this short-deck explainer.)

The next man out was Elton Tsang — another player who seems perfectly happy with whatever is happening, even when he’s busting. After a blockbuster Cyprus stop, Tsang had had a quiet start to his Madrid festival, but was in his element back at the final table today.

Tsang had never really had what you might call a big stack today, and was sitting with only 1.6 million when he felt that his time had come. He had

and was in pretty good shape against Lim’s

, especially after he begged for, and then hit, a queen on the flop.

However the full board was

and that was another straight for Lim. Tsang was toast in fourth and won €302,000.

This Triton Madrid stop has been characterised so far by some very long and tricky short-handed battles. Three-handed and heads up play has lasted an eternity. The pattern repeated this evening after Lim, Li and Yu became the final three, with chips moving between them for a good couple of hours.

Yu, who won a short deck event in Cyprus last month, was always the short stack among the three, and eventually the pressure told on him. Yu was down to 1.8 million, 22 antes, when he moved all-in with

. Lim had a big stack and his favourite

. Once more, he filled a straight.

The heads-up chip counts — and recent history — suggested this might go on for a long time yet. The two remaining players, who had been the dominant forces at the final, had around 114 to 100 antes, which gave them plenty to play with.

There wasn’t, however, much meaningful action heads-up until suddenly there was a flurry. Li limped pre-flop and Lim checked, taking them to a flop of

What did they have? Well, at this stage, not all that much. Li had

, for two pair (good, but vulnerable). Lim had

, which was nothing but a gutshot at this stage. However Lim also had the chip lead so could afford to peel.

turn was great for Lim. But what was even better was the shove, for his last 5.9 million, from Li. Lim called with the straight and managed to fade Li’s redraw outs on the river. It was all over.

Lim has now finished fifth and first during this series (and has been the bubble boy once), so he is truly finding his feet. With five more events still to come, he’s going to be a danger for the rest of this festival.