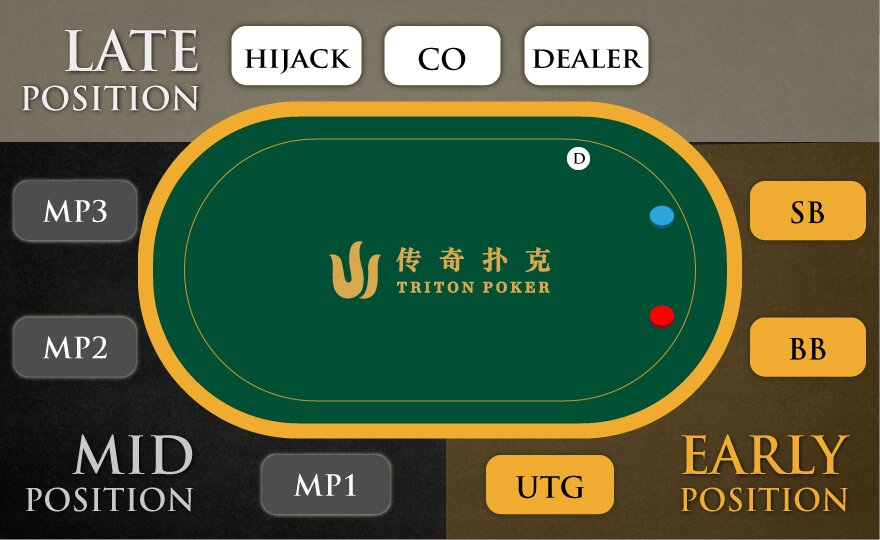 Poker playing positions need to be understood. To be successful in flop games such as Texas Hold’em and Omaha you need to maximize the strength of your position and accept when the odds are stacked against you.

Here’s a rundown of the most common poker positions around a table dependent upon where you are seated.

This is in reference to where a player sits on a poker table. In the vast majority of cases your position is defined in relation to the dealer. It also defines whether you will be first or last to place your bet.

When you hear a player telling you that he has “position on you” they will be sitting on your left and will always act after you have made a play.

The reason the deal moves from player to player around the table is to give everyone an equal time in each of the positions. As will be understood below, there is no doubt that certain ones are far more advantageous than others.

The Button – Dealer (also classed as a LP)

In flop/community games such as Texas Hold’em being “on the button” is where everyone would like to stay! In terms of advantage it is the best position in poker.

After the flop the dealer always gets to act last in every round of betting for that game. Being in this situation means you have had the advantage of watching each player in the hand act before making your decision. This offers significant advantage and gives you leeway to play hands that are marginal.

In the vast majority of cases being in an early position refers to the 3 seats to the left of the dealer.

Quite the opposite of being “on the button”, EP is seen as the worst position at a poker table because these players must act first. The closer to the dealer you are the worse the EP because you do not have the knowledge of how others around the table will play their hands.

These positions are called:

• Small Blind – SB: 1st player to the left of the Button

In this position the player acts second to last during the opening round, but from then on must act first in each subsequent round. Because you are playing “blind” with stakes this is deemed as the worst poker table position.

You do have position on one player, but having to pay double the SB is not what you want. While you do get to act last pre-flop, this is still a long-term losing seat. The trick when in the BB position is to lose as little as possible!

• Under the Gun – UTG: Directly left of the BB

The term refers to the pressure you are under in this position. This is because you have to act first before the flop in such games as Omaha and Hold’em.

This position indicates the 3 players to the left of the last EP. It is not the best spot nor the worst. A player gets to see how those in the EP act, but have a few players who follow. While it does allow you to play a little looser, caution is still the name of the game.

Late position – LP: The dealer and the 2 seats directly to their right

The dealer and the 2 players to their right have the best position in a poker game. It means they have insight into how the hand is progressing and puts them in a strong situation in terms of deciding to call, bet, raise or fold. This is because those in the LP have already seen how the majority of players have acted.

Equally, if no bet has been placed in a round, players in LP can claim the pot by betting. This is termed as “the betting position”.

We have already explained “the Button” (dealer), here are the other two LP:

• The Cutoff – CO: Directly to the dealer’s right

In the Cutoff seat, you can afford to be more adventurous. By raising aggressively from this spot, you can force the button to fold. Such a play means you are looking to “buy the button”.

• The Hijack – Directly to the Cutoff’s right

This seat got its name due to the fact that Button & Cutoff steals are so common. The term was coined because the position gave rise to “hijacking” the 2 later seat’s action through stealing the blinds before them.

Know where you seat and produce more profit!

Study each situation you are in during games and make a note of success or otherwise. By understanding the risks and benefits of each you will be in a far stronger position to take those much-desired pots.