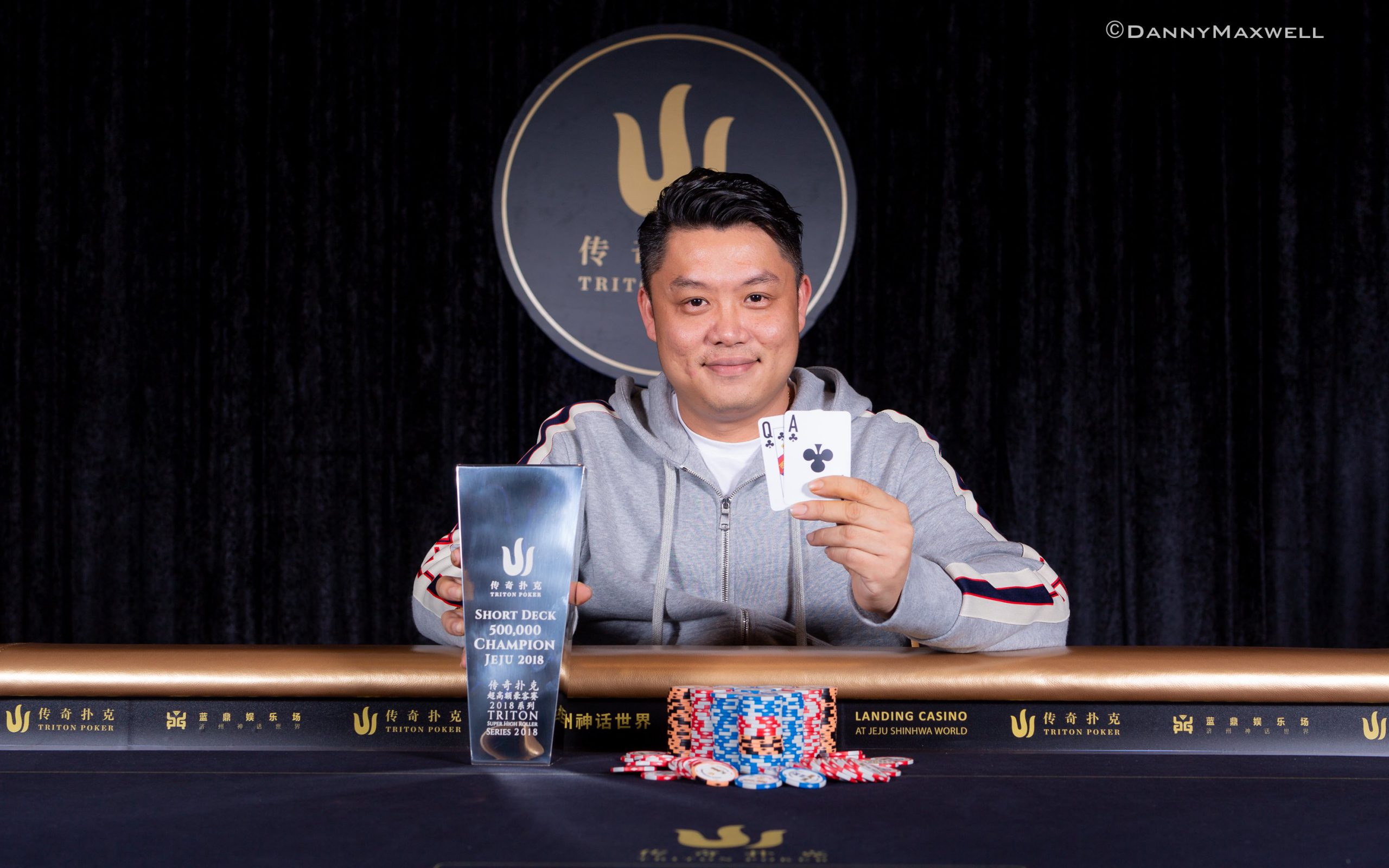 We’ve had the perfect beginning to the Triton Super High Roller Series in Jeju, South Korea.

In a perfectly symmetrical moment, Ivan Leow finished as the Day 1A chip leader, winning a massive pot from Rui Cao in the last hand of the night. Leow would end Day 2 in precisely the same manner, only this time it came attached to a title, trophy and $1m bucks.

‘He’s the best short deck player in the world,’ Leow told PokerNews when referring to his heads-up opponent.

When it comes to tournaments, both Cao and Leow are bang on form. The first time Leow flicked it in a Short-Deck event was in the Triton Series held in Montenegro, and he finished sixth in the HKD 250,000 event, and sixth in the HKD 1,000,000 Main Event.

Since then he has won an HKD 100,000 buy-in High Roller at the Oriental Poker Championship in Macau, as well as finishing 2/513 in the Main Event at that same festival. He also finished seventh in the HKD 100,000 buy-in Short Deck event that Nick Schulman won yesterday, so he’s in form.

Let’s take a look at how these two players ended up at the end zone.

The first level was the Gabe Patgorski show.

Firstly, he got it in with AcQs versus the pocket kings of Chan Wai Leong, and couldn’t find his ace, reducing his stack to 80,000. Then he doubled through Alan Sass T9o>AKs, after flopping a nine, before doubling through Mikita Badziakouski KK>77.

Chan opened to 125,000 in the first position, and Dwan called on the button.

The double gutter versus top pair and the 8s completed the straight for Dwan, and after the 7c completed the action, he moved up to 2.4m, and Chan was down to 50,000 chips. Those chips ended up in front of Patgorski when his AQ beat the K8s of Chan in the very next hand.

The Belarusian got it in good with pocket aces, against the QJs of Patgorski and the JTo of Dwan, but Patgorski turned the straight to scoop the 1.4m pot, push Dwan down to 1.9m, and deliver a final table.

Alan Sass left the party two eliminations away from the explosion of party poppers when he lost his final all-in T9o>AKo to Jason Koon, and we were on the bubble.

The position nobody wanted went to Gabe Patgorski, and it was Leow causing all the kerfuffle. Patgorski flopped top two pairs holding KJo, but Leow’s rockets caught up when he made a straight on the river.

Then we lost the leading man in the fifth place.

When the action checked to Dwan, he moved all-in for 665,000, and the human wrecking machine, Leow, looked him up. Dwan showed KJo, and Leow showed T9s, before promptly turning a straight.

Devan Tang busted in fourth place when his AK lost to the AJs of Koon, who hit a jack on the turn, and then Koon himself exited in third, losing out in the following cooler.

Koon limped into the pot holding pocket tens, and Leow bumped it up to 340,000 holding pocket jacks; Koon called. The flop was JdTs8h, and the pair got it in. Two cards later, and we were heads-up. It’s worth noting that this is the third Short-Deck tournament that Koon has cashed in, and he has only played four of them.

It was like pitting a bulldog against a poodle.

The pair got it in on a flop of KdQdTc with Cao having flopped a straight, holding Jd9h, and Leow chasing with AQcc. The 6c on the turn gave Leow flush outs, and the 9c was the perfect card to send Leow’s rail into rapture.