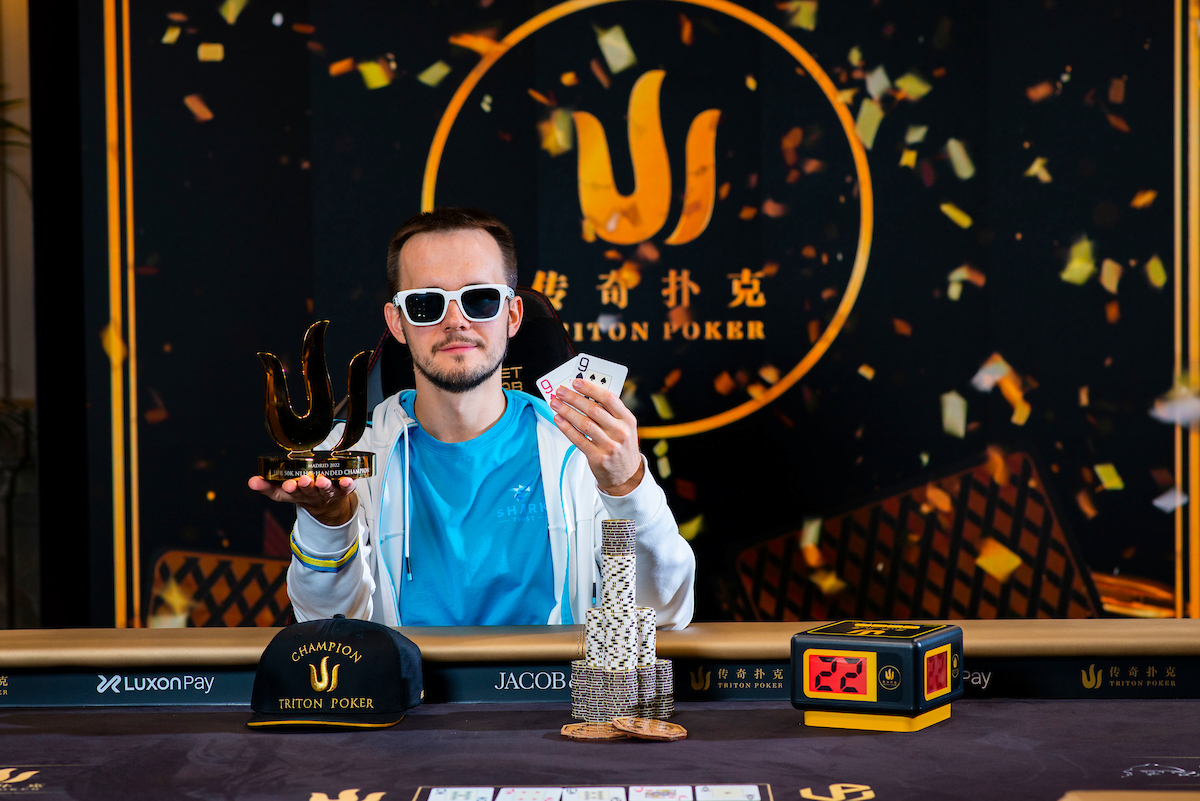 The final stages of the biggest event on the Triton Madrid schedule so far pitted against each other two players who had taken very different roads to end within touching distance of a title.

On the one hand, there was Mikita Badziakouski, already a three-time Triton Series champion, who assumed the chip lead early on the second day of this €50,000 buy-in event and then barely relinquished it for hours, sitting calm and comfortable and making all the right decisions to keep his eye on the top prize — and a record-setting fourth success.

Sitting opposite him was Danny Tang, a Triton regular seeking a first win, whose passage through the tournament was anything but serene. His tracking graph went up and down precipitously, and he was staring at near certain elimination six-handed, when he somehow managed to win with the worst hand in a three-way all in.

However, Tang took the triple up, bludgeoned past another couple of players, and then squared off against Badziakouski, the last two of a 101-entry field. There was €1,340,000 on the line for first place and €932,000 for second. Perhaps wary of each other’s skills, and aware of how fickle the poker gods can be, the pair talked about a deal.

But they opted not to do one and returned to the table to play it out. And by then, all bets were off. Tang and Badziakouski somehow became locked in one of those titanic heads-up duels where it looks as if either man could win it at any moment, but also that it might go on forever.

After more than three hours, the real winner was the tournament structure, which shallowed the stacks to the point that there was no longer much room for players to manouevre. They eventually had only 25 big blinds between them, but still neither could get one to stick. When it honestly looked as though they might just have to somehow arrange a tie, the deadlock was finally broken.

and the pocket pair held.

This was a majestic moment for Badziakouski. He is nothing if not stubborn — a fact he has demonstrated numerous times on the Triton Series and beyond, and which had earned him those three previous wins — in Montenegro in 2018 and 2019 and Jeju in 2018. By his standards, a three-year period without a victory was an eternity — and Badziakouski was eventually able to end the drought.

Tang’s search for a title goes on, but it can’t be long. He has been pictured in many winner’s photos down the years, hugging friends and celebrating as they all earned their silverware. Surely soon enough he will be allowed sit there by himself and hoist the trophy aloft.

He takes €932,000 as consolation. But Badziakouski becomes the first seven-figure prize winner of this stop, and collects €1,340,000 plus the fourth trophy. Not that he was bragging about it. “I put in high volume and have been lucky sometimes,” he said. “It’s pure luck. We had a couple of all ins and I was the one to win it.”

The tournament resumed on Day 2 with 23 players, meaning some exceptional talents hit the rail before the bubble bobbed into view: Patrik Antonius, Stephen Chidwick and Erik Seidel were among those who fell short. Tournament organisers arranged a redraw when 14 players were left, with the next man out leaving with nothing.

At this stage, there were five players with fewer than 20 big blinds, but tournament strategy is so advanced these days, that that by no means guaranteed a quick bubble resolution. So it proved, as these wily operators picked their spots and refused to call it quits for at least 75 minutes. There were a few double ups, a few big folds, and lots of nerves, even from these seasoned campaigners.

The unfortunate player ended up being the Polish cash-game crusher Wiktor Malinowski, whose fortunes took a three-stage nosedive. Firstly, he was very unfortunate that Henrik Hecklen didn’t bust on the feature table, when Hecklen went up against Adrian Mateos with

. Hecklen turned a seven to survive.

At that exact point, Malinowski was involved in a pot against Phachara Wongwichit on the outer table, where Malinowski flopped two pair with

Had either of those situations ended differently, Malinowski would have made the money. But the way it went was that Badziakouski then polished him off, with

Everyone immediately breathed a sigh of relief and Brian Rast, the shortest of short stacks, got it in immediately, lost, but knew he would be picking up €101,000 for 13th place. That was fortunate for him, because his elimination was grim: pocket queens losing to Bruno Volkmann’s pocket 10s. At least he had the comfort blanket of a debut cash.

With only eight spaces at the last table (and seven at the “official” final), some more top names would need to depart. And, in fairly order, the tournament lost Wongwichit, Phil Ivey, Mateos and then Hecklen, taking them to that single table and the dinner break. They all won more than $100K and a handful of all-important Player of the Year points.

When they reconvened, Badziakouski was some way clear at the top of the counts. The stacks were as follows:

Loeliger had dazzled on the opening day of this tournament, his first day of action for the stop. But he’d had his wings clipped somewhat on the second day, unable to get much going, and he became the next elimination. Loeliger moved his last 1.025 million (about 13 big blinds) with

, and was called by Badziakouski’s

. There was a king on the flop, and nothing else meaningful, which meant Loeliger was done in eighth for €187,000.

The next player out was also seeing his first Triton Madrid action in this event: Tom-Aksel Bedell. A regular on the European tournament circuit, Bedell often pops up in the big events where his talents belie his appearance. He is far from a spring chicken, but he has the aggression and fearlessness to surprise many of his opponents. It’s a result of his Norwegian heritage — although he now lives in Spain, and visits Casino Gran Via regularly.

Bedell decided to give things a spin on the Triton Series, and if the Twitch and YouTube chat is anything to go by, he became a quick favourite. Everyone was sorry to see him go in seventh, when his

Nobody at this stage was an enormous stack, but things were looking a tiny bit perilous for Tang, who had about 15 big blinds. But things suddenly took a real turn for the better for Tang, precisely as they turned very sour for Volkmann.

Volkmann is one of a cadre of top Brazilian pros who dominate the online tournament scene. But he decided to take a stab at some live poker this week and hopped in here in Madrid, a decision that earned him €389,000, but even so, ended in a sickener.

Tang opened a pot with a shove for 1.5 million, sitting with

. In the small blind, Holz looked down on

and re-shoved for his 2.5 million stack. Volkmann, who covered both of them, then woke up in the big blind with

The flop was immediately bad for Volkmann. It was

. The turn was then the

and the river was a further twist:

. That gave Tang two pair, for a huge triple up; it gave Holz a pair of kings to win the side pot, and it gave Volkmann nothing. He lost all but three big blinds.

They were in very soon after, when Holz this time had pocket queens and Volkmann’s

In the commentary booth, Randy “nanonoko” Lew was delighted by the poker he was seeing, describing every hand as being full of complexity and nuance. There was one hand in particular that grabbed him, when Holz made a big and convincing bluff with ace high to get Kevin Paque to fold a pair of sixes. It wasn’t the biggest pot Paque had played (that one he won: a big flip against Badziakouski to put him temporarily into second place), but Paque had seemed like he knew he might be being pushed out of it. And he never recovered.

Paque left the tournament in fifth place, when his

. Paque, primarily a cash-game player, but with a string of decent tournament scores too, banked €389,000.

Tang was now the man with the momentum. Ever since that incredible triple up escape versus Holz and Volkmann, the Tang player couldn’t put a foot wrong. He was responsible for the next knockout too, sending Mike Watson to the rail in fourth.

There was nothing controversial about this one. Watson had pocket fours and shoved over Tang’s open. But Tang had aces, and there was nothing to help Watson on the board. Watson has had a very good trip here so far, cashing in three of the five tournaments he has played. He has finished in second, seventh and now fourth, this time adding €482,300 to his coffers.

Tang seized the chip lead with that knockout, even though all three remaining players still had relatively comfortable stacks. That very quickly changed, however, and sent Tang soaring to the summit, when he knocked out Holz in third. This one was another cooler: Tang opened to 300,000 with

and Holz three-bet to 1.1 million with

. Tang moved in, and Holz called off the extra 3.7 million.

There was a king on the flop to leave Holz drawing thin. He was drawing dead by the turn. Holz took €482,300 for third.

From near-certain elimination, Tang now took a two-to-one chip lead — 13.375 million to 6.825 million — over Badziakouski. And although the pair stepped outside apparently to discuss some business, they did not resolve anything and returned to play it out.

Tang’s lead grew to four-to-one, then eight-to-one, and then ten-to-one. And only then did Badziakouski find a double up, with

. Then Badziakouski did it again, this time with

The pendulum had swung back to the Belarusian, and he now edged closer and closer. Badziakouski retook the chip lead when both players had a queen in the hole and the flop brought another, but Badziakouski’s kicker played. They now had only 50 big blinds between them, and a rapid conclusions seemed inevitable. But still they managed to stretch it out some more, neither willing to budge an inch.

Every small pot was now the difference between first and second place, until eventually, at 1am local time, it finally ended. Badziakouski’s girlfriend was the first to congratulate him, as his friends also draped a Ukraine flag over his shoulders.

Both heads-up players will probably try to grab some rest before registering for Event 7, whose second day starts at 1pm tomorrow.