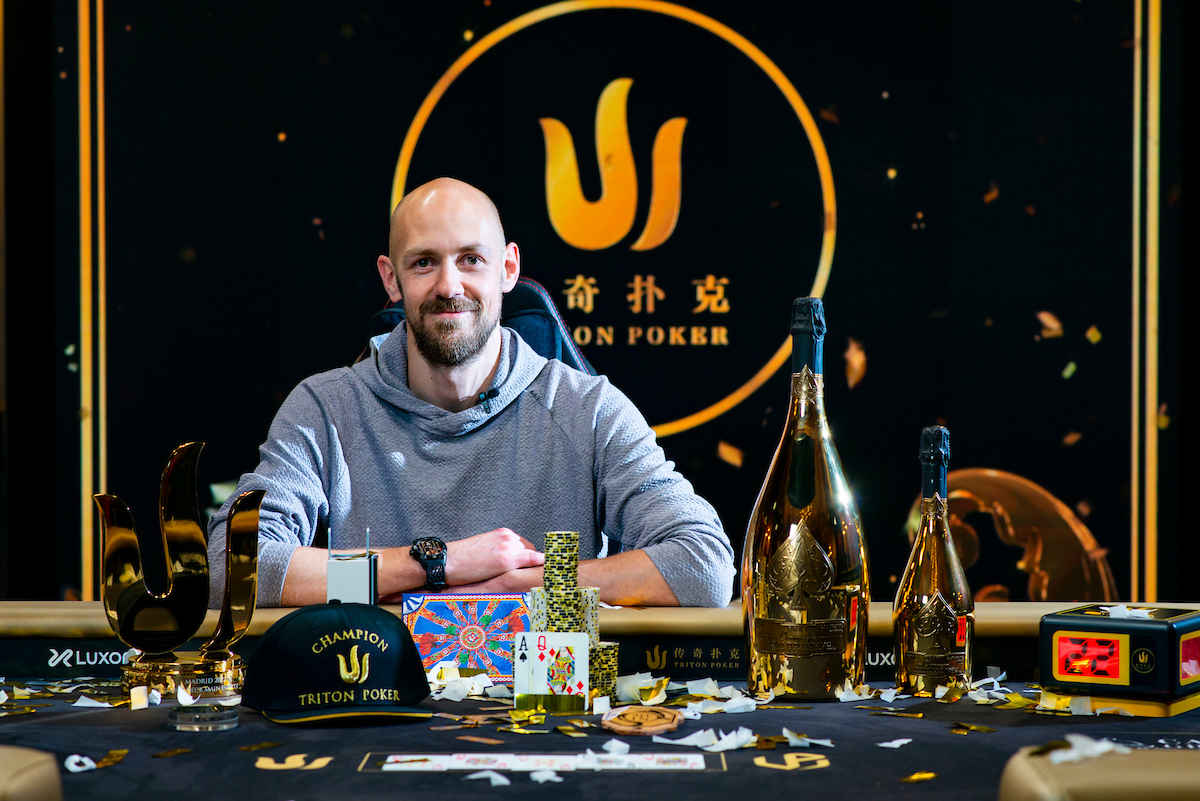 Arguably the best player in modern poker without a Triton Series title remedied the situation in dramatic fashion on Tuesday night as Stephen Chidwick, the online phenom turned high-stakes tournament boss, won the €100K Short Deck Main Event in Madrid. To do so, Chidwick had to battle past Tony Guoga (aka Tony G) heads up to claim a €1.8 million first prize.

“It feels incredible,” Chidwick said. “Such a big event. It feels amazing.”

Chidwick had been heads-up once before this week, taking the largest slice of a two-way chop with Michael Addamo, before being defeated with just the trophy and title on the line. But Chidwick made no mistake at the final table in this huge Main Event, overcoming an early blow that looked like scuppering his chances, to refocus, rebuild and then remain immune to the particular challenges of playing Guoga heads up.

His prize is that enormous pay-check, of course, plus the exclusive Jacob & Co timepiece, offered only to Main Event champions. (“Beautiful,” Chidwick said.) He also picks up a huge number of Player of the Year points, putting him into the overall lead.

These two men had played what had seemed like a tournament-defining pot within the first hour or so of play beginning, back before even the bubble had burst. In that one, Guoga cracked Chidwick’s aces with pocket queens and scored an enormous double up. It allowed Guoga all the privileges of a monster stack for the vast majority of the day, and forced Chidwick back on the ropes.

But when the two became reacquainted after everyone else had departed, Chidwick got the better of the old foe. Guoga, looking for a second career Triton title, banked €1.305 million for second. He had also had to bounce back from a micro-stack at one point to put himself in contention again.

There couldn’t really be a starker contrast between the table demeanour of these last two players. Chidwick is silent, focused and menacing; Guoga is no less of a tyrant, but does everything with more of a flourish, a rub-down and with the volume turned up. Guoga tried all his tricks at the final table, cracking wise, loudly ordering expensive drinks, attempting to get under Chidwick’s skin.

But the British player could not be shifted and would not be beaten. The only amazing thing is that it has taken Chidwick so long to lift a trophy, but he has a third, a second and now a first-place finish from this trip alone. And the floodgates could be about to open.

“It was a super long final table and I was short for a lot of it,” Chidwick said. “I lost count of the all-ins I won.” But he added that he was thrilled to win finally, especially on such a prestigious tour, and vowed only to “keep playing” and expressed a desire “just to get better”.

The bubble burst when Webster Lim went out in ninth — read the bubble recap here — but the official table only allowed seven players. So the tournament progressed on for a little while on two four-handed tables. That was until Michael Soyza was knocked out in eighth, losing the last of his chips to Stephen Chidwick.

Soyza shipped a few to Danny Tang in a previous hand, and then open-pushed the hijack with

and re-shoved for 1.125 million. That persuaded Richard Yong to fold his

The board would have smashed Yong. It came

. But Yong was irrelevant, and it missed Soyza. “GG boys,” Soyza said as he walked away, looking for €240,000. That’s his third cash of this trip to Madrid.

They finally now consolidated around a final table and Tony G, after his massive pre-bubble hand against Chidwick, still held a sizeable chip lead.

The stacks at the start of the official final were as follows:

Seth Davies was the shortest stack and was obviously looking to get his chips in. The real problem with short deck, however, that even if you find the perfect spot, you never really have as much equity as you would probably like.

Here’s an example: Davies had

and was looking at a flop of

Badziakouski called with a dominated

, but the turn and river were

Ever since the pre-bubble double up, things had been pretty easy for Tony G. His tracking line was pretty much flat, and any pronounced jerks were in the upward direction. He beat Danny Tang out of a pot with aces over ace-king and crept further upward — until he was forced to pay out Yong in full when the Triton co-founder turned a full house with

. This wasn’t a loose call by Guoga, though. He also had a full house with his

It pegged Guoga back a small amount, keeping him in sight of the chasing pack, now led by Yong.

By contrast to some of the leaders’ tracking graphs, Isaac Haxton’s suggested someone in need of a defibrillator. He was up, down, up and then down again, this final time being permanent. After Haxton opened pre-flop with

, from a stack of around 2 million, Yong put it all-in, covering the American’s stack.

Haxton called and saw that Yong had him dominated with

. Haxton flopped a gutshot, but missed it, and with that his tournament was done. Haxton’s third cash of the series earned him €380,000.

As players departed, the rich got richer and the smaller stacked — Tang and Chidwick, in particular — had to look for spots to either double or leave. When they clashed against one another, it was always likely to prove terminal for the loser. They did indeed butt heads, with Chidwick’s

flopping a straight to beat Tang’s

and though Tang had the marginally bigger stack, and doubled it quickly afterwards, Tang was knocked out on the first hand back from the dinner break.

This time his pocket jacks lost to Badziakouski’s

and Tang’s tournament ended with a visit to the payout desk looking for €490,000. Tang has cashed four times this trip, and leapt almost immediately into the €150K event, looking for No 5. (He was sat next to Haxton.)

All established patterns continued for the next level or so, where Tony G was able to raise frequently and take pots uncontested, while Chidwick had to navigate a minefield with his tiny stack and somehow find a way to grow it. He did exactly that in two major pots, doubling up first through Yong and then through Guoga, and that gave him 40 antes. That was roughly the same as Yong, so the table now split down the middle: Yong and Chidwick both equally short, and Badziakouski and Guoga equally much bigger.

There’s frankly not much point attempting to explain what happened next. Guoga began a steep downward slide, his magic touch having seemingly deserted him. Having been so dominant, he now spent a small amount of time as the tournament short stack. However, his fortunes turned back just as quickly, and in the space of about 15 minutes he was chip leading again, ruining the prospects of Yong in the process.

Guoga doubled through Chidwick, with

. And then he doubled through Yong, with

The next time those two got their chips in, Guoga had

Yong already had one second place finish from his Triton Madrid visit, and now had to make do with fourth as his search for a second title continues.

So what of Badziakouski? The Belarusian master had mostly taken a back seat in this short-handed insanity, but he doubled up Yong shortly before his elimination (

) and he then lost a big one to Chidwick, shortly after they went three-handed.

. Badziakouski flopped a king, but Chidwick rivered an ace and a flush, to win it two ways. It left Badziakouski very, very short and his chips went in with

, which ended up inferior to Guoga’s

. Badziakouski, with four titles already to his name, will have to wait for number five. He took €840,000 for third.

And so there they were, heads-up, with Chidwick now in the last two for the second time. He previously banked €1.2 million after chopping Event #7 with Addamo, and he was now guaranteed another €1.3 million, at least. As for Guoga, he was eyeing a second Triton success, having won in Rozvadov in 2019.

Guoga had the chip lead again — 11.15 million (112 antes) to Chidwick’s 6.85 million (69 antes) — and we settled in for the long haul. “Tune in to Triton Poker for the greatest heads-up battle!” Guoga bellowed to the cameras.

The first meaningful pot heads up was a huge double for Chidwick. It went call, shove (from Guoga) and call from Chidwick pre-flop, with Chidwick’s 5.2 million stack effective. Chidwick was in bother with

, but rivered a queen to double.

It was small ball from there, with Guogo nibbling back at Chidwick, and once turning down the oppotunity to gamble for it after Chidwick shoved pre-flop. “You’re too good to go all in,” Guogo jibed, looking for info. “You’re probably a very nice guy inside.”

Chidwick didn’t blink and Guogo folded that one.

Not long later, he did get it all-in, however. Both players had found big aces —

for Guoga. And despite a lot of outdraws in previous pots, this one ran pure.

That was it. Chidwick was the champion.