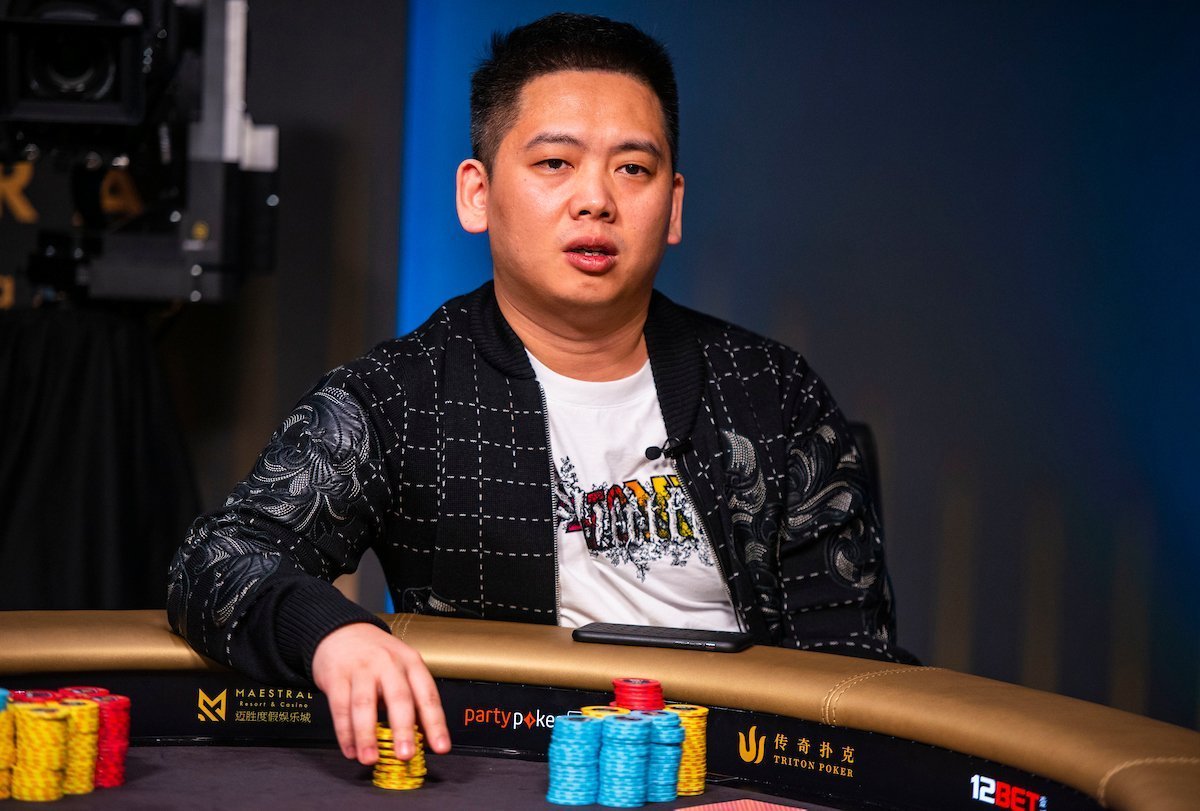 Another day, another massive short deck event on the Triton Super High Roller Series, this time demanding an enormous HKD 750,000 ($96,000) buy-in and quickly building a prize pool of more than HKD 38 million ($4.86 million). That means that this time tomorrow, two more millionaires will be named, with the first prize weighing in at HKD 13.3 million (nearly $1.7 million).

All that money came from 29 unique players and 24 re-entries, only 17 of whom survived 11 levels of play. With six places paid, it’s going to be a tense few hours to kick off Thursday’s action, which will be the penultimate day on this two-week festival.

The chip lead changed hands four times within the last level, with Isaac Haxton being overhauled first by China’s Wang Qiang and then by Sam Greenwood. Then Qiang’s neighbour Tan Yuan, pictured top, leapfrogged them all with two big hands against Mikita Badziakouski, not long after he knocked out Danny Tang.

Greenwood’s big double up was the most dramatic moment: he made a call for his tournament life three hands from the close of play. Haxton shoved for his 2 million stack, covering everyone at his table. It was a classic big-stack bully move and Greenwood wasn’t buying it. He called with his

and caught Haxton with

. Haxton missed and so Greenwood flew to 1.95 million.

By that point, Qiang had also edged towards the top of the counts, finishing with 1.881 million, but all eyes should really have been on Tan, who bagged 2.186 million.

Tan finished second to Jason Koon in the short deck main event here in Montenegro last year for the biggest cash of his career — HKD 18.121 million ($2.3 million), and Randy Lew described him as “one of the most experienced short deck players there is”. He showed all those skills late on, when he ironed out Badziakouski, twice.

Tan called a three-bet with

, flopped an ace, and let Badziakouski barrel into him with

On the next hand, Badziakouski tried to represent a flush on a board of

, but Tan was the man who actually had it. His

Badziakouski was intrigued enough by the hands to sit behind at the end of play to watch it through on the stream, on a 30-minute delay. “This last hour of poker has been amazing,” Lew added in the commentary box.

The hand between Haxton and Greenwood took place on the same table as Triton cashing machine Paul Phua, who is eyeing his 13th in-the-money finish on the series he co-founded. Phua’s quest received a late boost when he knocked out Triton Ambassador Jason Koon, but there’s still a healthy contingent of the Triton family involved, with Richard Yong also going deep and making it into the second day.

Although it was mostly very familiar faces in the field today, there was one newcomer to action this week: Andrew Robl sat down to play a tournament after mostly focusing on cash since arriving in Montenegro. He needed to survive a late scare when he got his chips all in with

and was dominated by Jesus Cortes’s

. But the board made Robl a straight to double him up and give him 756,000 in the overnight counts.

Here’s how they line up for tomorrow’s noon re-start. The day two seat draw is alongside.